This is part of a series of articles on private investment in Africa’s transmission infrastructure by Chris Flavin and Ryan Ketchum.  Chris is Head of Business Development at Gridworks and Ryan is an emerging markets energy lawyer and partner at Hunton Andrews Kurth LLP.

The first article in this series discussed the need to increase the level of investment in electricity transmission systems to reduce costs, facilitate the transition to energy systems that are less carbon intensive, increase system stability, and reduce the level of generation reserves that are required to maintain system stability.  It also briefly introduced four business models that can be used to unlock new sources of capital by facilitating private investment in transmission infrastructure across most of Africa (and in emerging markets more generally).  Those four business models are:

A concession is a right to develop, construct, operate and maintain an infrastructure project and to earn the revenues generated by the project.  Concessions are typically granted by a government, public authority, or state owned enterprise.  A concession may be granted pursuant to a concession agreement, a lease, a lease and assignment agreement, a project development agreement, or similar agreement.  In most countries, the name of the agreement that grants the concession is not important. Instead, the rights and obligations created are the defining features of a concession.  Although the name of the agreement is not important, we will refer to it as the concession agreement.

A concession may be appropriate if a host country desires to:

A concession may be less attractive to a host country that:

As a country considers whether a concession is an appropriate tool for achieving its objectives, it should also consider how the role of electricity sector participants will be changed by the concession, how stakeholders will be affected, and how to engage with those stakeholders to build support for the transaction.

Instead of establishing rates for the term of the concession at the outset, one of two approaches is usually adopted.  The most common approach is for a concessionaire to be subject to technical and economic regulation by an independent regulator that will establish rates using either a traditional cost-of-service approach to regulation or a performance-based regulation.  These regulatory systems will be covered in a separate article.  Both systems require that a regulator articulate in a set of tariff guidelines or a tariff methodology containing the methodologies it intends to use to regulate the concession.

Ideally, the legislative framework and other aspects of the enabling environment in which a concession will be implemented would include:

However, as the discussion above as to how to use regulation by contract to achieve the seemingly impossible task of implementing economic regulation in a country that has not established an independent regulator shows, with enough creativity, a sector that lacks some of the above features of an enabling environment can implement the concession model.

Collectively, the concession agreement and the transmission license typically provide that:

The participants in a concession and their contractual relationships are shown in the diagram that follows. 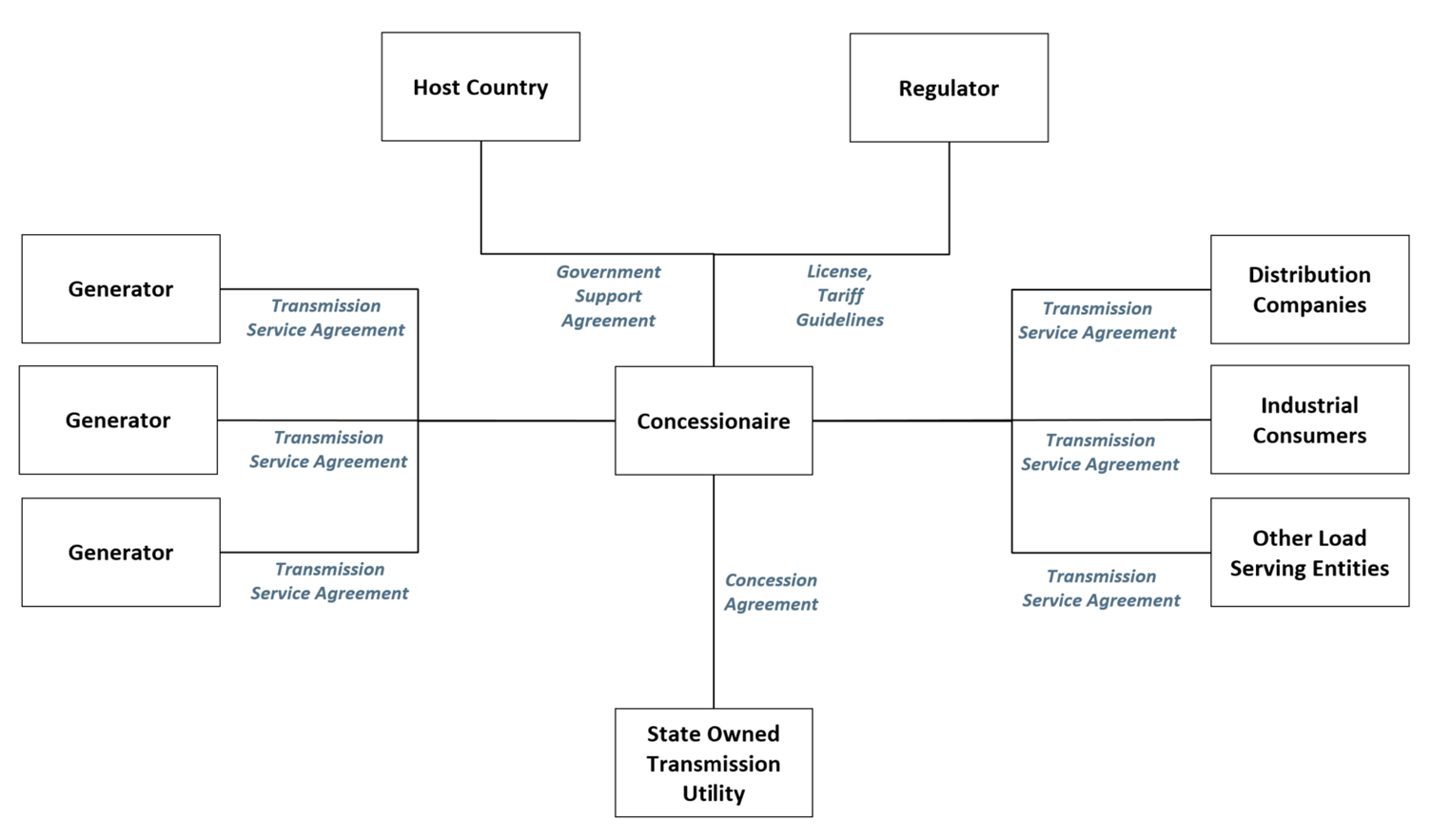 The above diagram assumes that the grantor does not also function as a single-buyer (the purchaser under all power purchase agreements) and the supplier to distribution companies, industrial consumers, and other load serving entities.  If it does, then either the grantor may continue to serve that function or the concessionaire could assume that function by entering (i) into a bulk supply agreement with grantor (under which it would purchase the capacity made available by, and the energy generated by, generators from the grantor), and (ii) separate bulk supply agreements with the distribution companies, industrial consumers, and other load serving entities to which it supplies energy.  Both approaches involve some complexities that are outside the scope of this article.  For our purposes the important point is that these complexities exist but can be overcome.

These topics will be explored in subsequent articles.

Some cookies are essential, others help us improve your experience by providing insights into how the site is used. For more information, please visit our
Cookie Policy.

This website uses cookies to improve your experience while you navigate through the website. Out of these, the cookies that are categorized as necessary are stored on your browser as they are essential for the working of basic functionalities of the website. We also use third-party cookies that help us analyze and understand how you use this website. These cookies will be stored in your browser only with your consent. You also have the option to opt-out of these cookies. But opting out of some of these cookies may affect your browsing experience.
Necessary Always Enabled
Necessary cookies are absolutely essential for the website to function properly. These cookies ensure basic functionalities and security features of the website, anonymously.
Functional
Functional cookies help to perform certain functionalities like sharing the content of the website on social media platforms, collect feedbacks, and other third-party features.
Performance
Performance cookies are used to understand and analyze the key performance indexes of the website which helps in delivering a better user experience for the visitors.
Analytics
Analytical cookies are used to understand how visitors interact with the website. These cookies help provide information on metrics the number of visitors, bounce rate, traffic source, etc.
Advertisement
Advertisement cookies are used to provide visitors with relevant ads and marketing campaigns. These cookies track visitors across websites and collect information to provide customized ads.
Others
Other uncategorized cookies are those that are being analyzed and have not been classified into a category as yet.
SAVE & ACCEPT